Create an Account - Increase your productivity, customize your experience, and engage in information you care about.

The Village of Bloomingdale can trace its founding to the Meacham family. In 1833, the Meacham brothers, Lyman, Silas, and Harvey Meacham started farming an area of 1,200 acres of land, which is an area now known as Medinah.

By 1837, a post office was established and in 1845 the area that is now known as the villages of Bloomingdale, Roselle, and unincorporated Medinah, became the 3rd town platted in the newly formed County of Dupage, Illinois.
First Permanent Buildings
In 1849, the area's 1st permanent building, a Baptist church, was built. The building still stands and today houses a museum. Around 1873, the Chicago and Pacific Railroad came through the northern part of the newly platted town. This event brought additional settlement and retail activity to an area already graced with 2 boot and shoemakers, a men's clothier and tailor shop, 2 carpenters, a wagon maker / blacksmith, and a cheese factory. Some of the original buildings have been restored and still stand in an area known as "Old Town."

The village's 1st schoolhouse was built in 1891 at Lake and 3rd streets.

Amenity Growth
In 1895 the Chicago Telephone Company placed poles and wires along the Chicago and Elgin Road (Lake Street); the 1st cement sidewalks were laid in 1899. By 1904, automobiles were common enough that the village established an 8-mile-per-hour speed limit on streets and drivers were required to sound a bell or gong at every crossing. 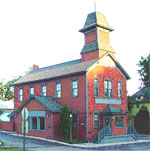 In the early 1900s, Bloomingdale and neighboring Roselle shared library books and a fire engine (purchased for $350), alternating their locations every 6 months. In 1923, the Village of Bloomingdale was reincorporated as a village by itself, separate from the areas of Medinah and Roselle.

Population Increase
The village purchased its 1st marked police car and the Bloomingdale Fire Protection District 1 was founded in 1954, the same year indoor plumbing came to Village Hall. Bloomingdale's population almost quadrupled from 338 in 1950 to 1,262 in 1960. By 1976, a special census counted the village's population at nearly 10,000.